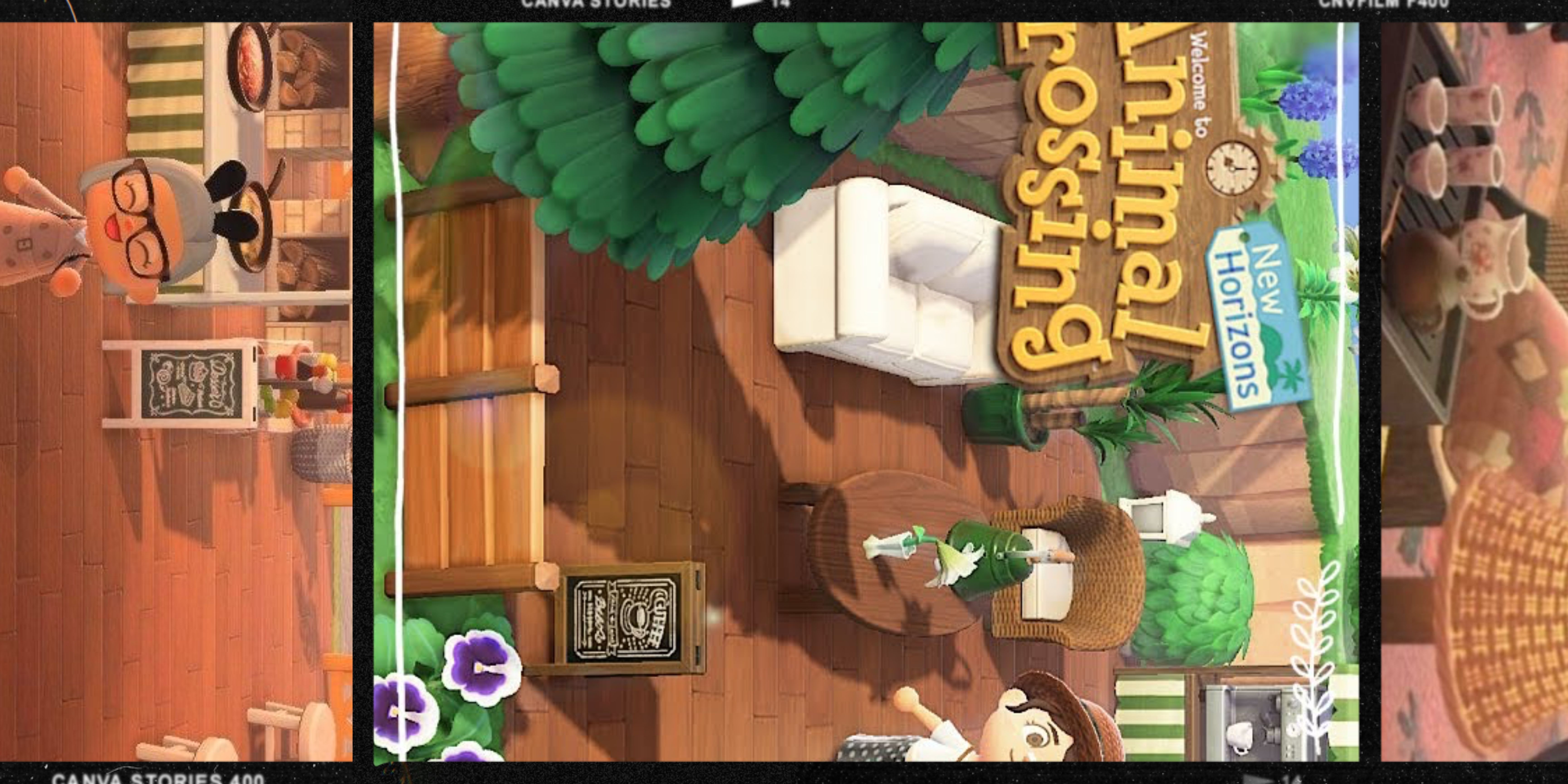 With my backpack mostly empty, I walked along the path of my island’s market area to the Able Sisters shop, quietly determined to coax Sable away from her sewing for once. A little bell jingled as I opened the door and immediately Mabel, the charismatic hedgehog sister with bright blue quills, ran over to greet me.

“Hey, there! Welcome to Able Sisters, where we sell fashions made lovingly by claw.” I smiled at her and glanced around the shop, a good size for our little island. Mannequins dressed in various outfits sat in the middle of the store, one of which had 3D glasses that I was tempted to buy. A large fitting room stood on the right with scarlet curtains, and a large quilt of tan and teal triangles hung from the left-hand wall. The rear of the shop held an assortment of shirts and dresses I could customize, and the back left corner belonged to Sable.

Sable’s quills were more of a dark burgundy shade, though not quite purple like her other sister Label, and her eyelids drooped over her dark irises as she stared down at her plaid fabric, running it underneath the needle of her sewing machine. A large brown dresser stood behind Sable with a basket of bundled fabric beside it. Colorful scraps were organized into cubbies on top of the dresser and spools of thread hung from hooks on the wall, ready and waiting to be used again.

I walked to the changing room first, proceeding to step behind the scarlet curtains and search through the day’s collection. Hangers and hangers of clothing expanded out in front of me and in the end I settled on a sparkly turquoise fairy dress to wear later.

“Thanks a bunch! I’ll go ahead and slip your purchase into your inventory for you.” With my tasks and shopping done for the day, I approached the other hedgehog sister, diligently at work sewing a dress in the back corner of the shop.

I started talking to Sable way back when the store first opened. Back then she was very quiet and hesitant but over time she opened up to me, telling me about her favorite detective show ‘Pointed Questions’ on Thursdays, and about her mother who she dearly missed; never failing to tell me how much she appreciated me. I loved talking to her and checking in, but also noticed that I never saw her anywhere else but behind her sewing table. Even on weekends the shop was open and stocked with Sable claiming that working on the weekends made her feel productive. Yesterday, I set up a little coffee shop when I redecorated my island and I decided to invite her for a drink.

“Hi Elysia! We’ve been having more and more hot days lately—summer is just around the corner. Probably time to get out my collection of summer aprons. . .”

“It really is a beautiful day out. . . Mabel, you and Sable work really hard all the time. I think you guys could use a break.” The sisters glanced at each other. “Close up early today. Mabel, you could visit Timmy and Tommy, and I could show Sable around — there’s this little cafe right by the beach.”

“You always have sewing to do, Sable,” I gently appealed. “And I love all the clothes you make and will always come to visit, but why not just take today off? You’re always working on the weekends too. . . please? Just this once? With me?” I hoped to convince her to regularly take more time off but this would be a good start. I glanced at Mabel, hoping she would help tear her sister from her workaholic habits.

“Yeah, let’s take a break Sable!” Mabel agreed, her sibling’s insistence enough for Sable to reluctantly put her sewing away as Mabel began to close up the shop early. We left the task to her and I reassuringly held Sable’s paw as we exited the little storefront, squinting at the return to the sun’s glare outside.

A little grin spread across her face as we headed down the stone pathway, walking past the plaza and the big brick Resident Services building towards my flower fields. On either side of the stone grew a gradient of rainbow petals, a sight that left Sable in wonder, eyes wider than I’d ever seen them. We continued down the path and across a bridge to my library: lines of bookshelves spanning from river to beach with an assortment of plants and places to sit, then finally, the café. Thankfully, none of the other villagers were around; I knew Sable wasn’t comfortable enough to talk to them just yet.

A refreshing breeze drifted in from the coast as we approached, surveying the sets of tables and choosing to sit under the tall cedar tree beside the river. A few feet away stood a little blue-green market stall with a tea kettle and espresso maker, accompanied by a cart holding a sugar tray. Small, quaint, and perfect for Sable and me.

“Coffee or tea?” I asked as Sable sat down.

“Tea please,” she whispered quietly and I prepared cups for the two of us, setting down the steaming lemon beverages and sitting across from my hedgehog companion. Despite the shade of the tree, Sable’s quills brightened under the rays of the sun, silently content in her change of scenery. “So. . . who lives on Aquatica?” Sable inquired.

“Well, there’s Sherb and Cranston and those two really like their snacks. Everything tastes great to them. Roald and Antonio are very athletic, and there’s Cheri and Flora who both want to be pop stars. Tammy’s a good cook and Marina, Nan, and Tia all like to read.” Sable nodded and took a sip of her tea, quietly focused on absorbing what I had to say. “Blathers is also on the island, he runs the museum down by the pier and Tom Nook and Isabelle spend their time in the Resident Services building.” I paused and looked out over the river before turning back to Sable. “What’s your favorite thing to sew?”

“Shirts and shorts are easiest, but I really do like adding patterns and flare to dresses.”

“I love all your dresses! They’re so beautiful and vibrant.” Sable smiled at the compliment.

“Thank you. . . it’s really nice to hear that. Which is your favorite?” I thought for a moment, gently stirring my tea as I struggled to picture my expansive closet, overflowing with Sable’s creations.

“I think the ballet dresses are my favorite,” I smiled, picturing the golden hemmed rainbow of gowns, the royal purple in particular since I had the slippers to go with it. Sable beamed as she took another sip of her tea, proud of her practiced craftsmanship.

“What else do you do during the day?”

“I dig up fossils, water the flowers and pumpkins, collect shells, check the shops, and talk to my neighbors. Sometimes I’ll decorate the island or change things around my house too.”

“Did you make this?” Sable asked, looking at our little sanctuary.

“It looks beautiful, and it’s really peaceful here. . .” she trailed off, looking toward the sound of the nearby waves. “What kind of fossils do you dig up?”

“All different kinds! There were a lot of creatures that used to exist here, even on such a small island. We can go to the museum if you’d like, and I’d be happy to show you around Aquatica.”

“I’d really like that, thank you so much Elysia. You’re such a wonderful friend to me and my sisters,” Sable beamed before finishing her tea and I smiled right back.

“Thank you for spending some time with me! There’s a lot I want to show you,” I grinned and finished my tea as well, setting our mugs aside and holding Sable’s paw as we ventured down to the beach and walked along it, collecting shells and feeling the sand between our toes as I showed Sable the island that, just like her, meant so much to me.

Emily Hizny is a Creative Writing and Publishing & Editing double major at Susquehanna University in the U.S., currently lurking around Twitter as @OctoEmily. Her work has been featured in SU’s literary magazine RiverCraft as well as Dwelling Literary, Ice Lolly Review, Inertia Teens, HOLYFLEA!, Clandestine Lit, and Melbourne Culture Corner. In her free time you can find her sewing, playing video games, and being a part-time octopus.