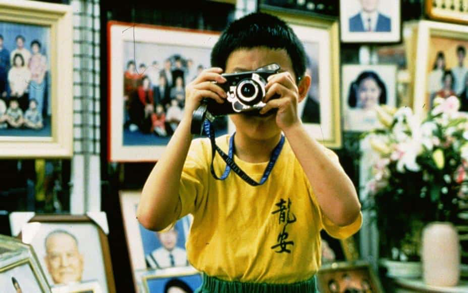 “We learn the very special kind of progress that leads towards a critical striving backward, towards the earlier on which the latter grows. […] We learn organism. As a result the tension between us and the finished product eases. Nothing exaggerated –tension inside, behind, underneath. Passionate only deep within. Inwardness.” (Paul Klee, Notebooks Volume 1: The Thinking Eye)

My first concrete observation of the mirror as not just an object but as a subject in itself was through Georges Perec’s film, Un Homme Qui Dort (French, 1974). The narrator observes his fragmented being in the mirror, split into two like a wide crack in the earth. The gulf is immeasurable. The size of the mirror insignificant; the size of tragedy unquantifiable. Through the processof seeing, the gaze becomes an important process of the film itself. What do we observe and how does that form our perspective? In my seeing, is there a being, independent of the causal forces; only the eye and not the body behind? Where do I look- into myself or into the nature of things?

Edward Yang’s Yi Yi (Taiwanese, 2000) explores through a realist perspective, a fracture of this very perspective. On the surface, it appears to be a story about a character; but soon, it organically develops itself into microtales of a plethora of characters. Identifying the protagonist of the film is almost next to impossible. In the tapestry of this film, each color has its own significant role to play. The force of cohesion, the process of seeing.

One of the most phenomenal films on the importance of deeply observing is the sublimely enchanting, Rajat Kapoor’s Ankhon Dekhi (2014). What is in the process of seeing that brings us closer to the truth? “Sab kuch yahin hai, aankhein khol ke dekho” (Everything is here, consciously observe!) proclaims the protagonist of the film. In a film, what is meant by deeply observing? Are there more truth frames within the frames visible to us? Seeing, akin to the peeling of the layers of onion…

This is also a question that one of our young protagonists, Yang Yang grapples with. The camera handed over by NJ — his father — to him is an important “toy” for him. Edward Yang toys with plural ways of “seeing,” in a similar manner as Yang Yang taking burst shots from the same camera to prove the presence of mosquitoes to his father in the first reel. The first half of the movie concentrates on setting the stage and developing the plot in the realist domain. What is about to unfold in the story with Ming Ming’s mother, who’s in a state of coma, is even more enthralling! Yang Yang learns that he is always able to see only half the truth because of the limitations imposed upon by his body. How can he see what’s going on behind?

Not only does Edward Yang raise a pertinent question here, as a filmmaker, but he also tries to examine the question from the perspective of the characters, especially the character Yang. From a broader perspective, it seems that the character Yang Yang is symbolic of the filmmaker Edward Yang. Until Yang Yang exhausts the second reel on burst shots of the heads of other characters in the film, in a bid to enable them to see better, he doesn’t establish his truth. Edward Yang, on similar grounds, extends the purview of his audience by spanning his camera over a horizon. The filmmaker’s camera toys with the idea of showing the half-truth they have not seen in films through a focus on the heads, expecting the audience to unravel the layers of the truth; just as NJ discovered various head shots that had been captured by Yang Yang. Edward Yang’s critical awareness of his own subjective role in the film is heightened by the awareness of Yang Yang’s role in establishing the other half of the truth, which is unknown to the audience.

These dual perspectives in looking are further elaborated by A-Di’s filming of the newborn, first through his own video camera, then by playing that video tape again for his wife, Xiao Yan. Similarly, Yang Yang’s race back to the school after missing it — because he was getting the film developed — is shown through Edward Yang’s camera, and the blurred images of the school’s CCTV camera. The doubly affirmed existence of the same phenomenon only elaborates upon the nature of the gaze of the filmmaker– a panopticon to allow the entire film to be soaked as an experience that goes under the skin of the audience; almost absorbing its surreality, through the evident trope of reality.

If the process of seeing the otherness of a situation is highlighted by Edward Yang, what is it that he wants us to see? The rivers of the city blend with the reality of the existing frames. The perceivable and the observable finally coalesce to signify a strange harmony. The grief of the characters rushing into the cityscapes is diminished by the city-lights; as if the enormous weight of their own solitude has been rendered irrelevant in the modernized and nuanced complexities of the urban solace.

The characters themselves embody a vague veil of translucence to the modern world, just as these frequently occurring reflective surfaces. The mirror and glass frames tend to expand the horizon for the audience, at times, providing a sense of contradictory or supplementary images to the main image. The entire scene can be envisaged as fragments of scene holistically brought together, with visible fault lines. The fault lines are not contained only by the reflective surfaces, but within the characters themselves. Yang Yang, who refuses to speak to the comatose grandmother on the pretext that she will not be able to see what he tells her, speaks to her on the day of the funeral about the true futility of the process of seeing if you are already aware of the subject seen. Until the truth is half known, the spaces for meditative lingering erupt. Wherever the truth is fully known, what remains is only a feeling of being “old.”

The film, with its frames bleeding into each other, is a hybrid organic evolution of the spiritual and the material, and the urban and the inward– a motif, for synthesizing these dialectical entities through an inward looking. It is a meditative experience of reality that transgresses from the realism of the film to the practice of serene spiritualism of the self: Yi Yi; coming together of a one and a two.