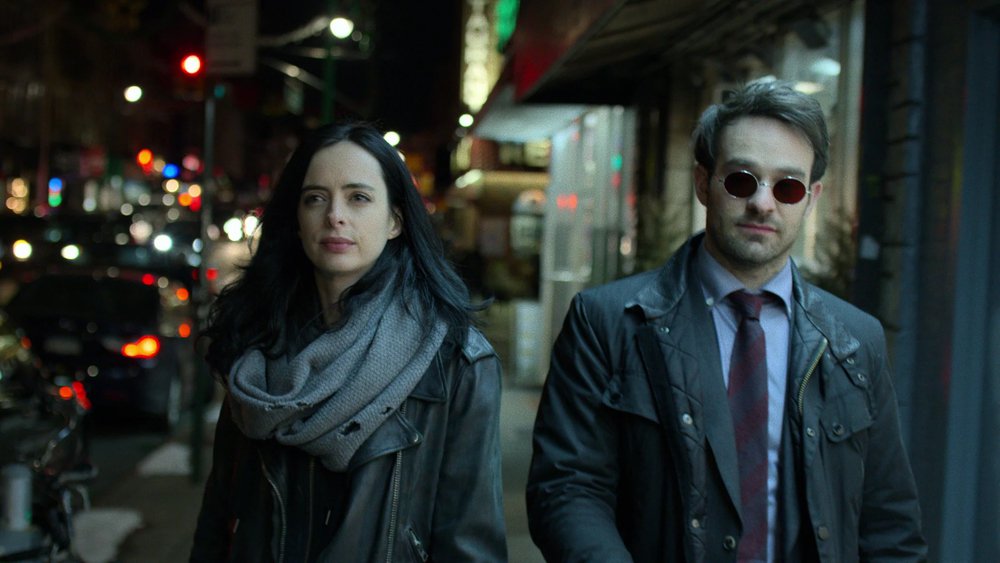 As Matt stepped out of the rubble he was buried underneath, Jessica was crawling deeper and deeper towards the bottom of the bottle.

Matt did not really have a sense of self-preservation; his entire life could prove that. Jessica sometimes marvels at it. This time, again, he proves it. Matthew Michael Murdock, the martyr, the broken man who has just (not really) recovered from a building collapsing over him, walks into Jessica Jones’ house without any fear. Matt opens the door, in time to see Jessica at the verge of throwing her laptop across the wall. He could hear her heartbeat (way faster than the normal rate), the stress radiating out of her. He could faintly make out her neighbor blasting some indie album, but it was all backgroung noise. Jessica was the center.

Jessica turned around at the sound of the door opening, and in a moment of shock, knocked off her whiskey bottle. For the first time in life, perhaps, she ignored the bottle and chose to stare at Matt’s absolutely not-dead body in shock. Matt was uncertain whether the shock was a good thing or a bad thing.

Before Matt or Jessica could make sense of their own emotions, a punch sent Matt flying into the couch. It will bruise, he knew, but he expected it. He had, in a way, wanted this, for, if not violence, Jessica would have chosen to express her anger (rage, a voice in the back of his head corrected) with silence. A silent treatment from Jessica was, according to Matt, worse than any fate out there, worse than a building falling on top of him (he would know, he lived through it). Matt also knew Jessica restrained her strength, and intentionally threw him at the couch so as to not hurt him, and to cushion his fall (hah).

Jessica was yelling. Matt’s brain supplied the information that it was directed at him. He smiled, Jessica never showed any emotion, apart from apathy to anyone. But being her… something for all this while now had made him one of the probably two people in this world who knew her entire emotional range.

“…I’m done with you and your stupid stunts, Murdock. Every time you pull some goddamned stunt like this, and then you waltz back in front of me like you’re the picture of innocence like – wait, what are you smiling at, asshat?”

Matt hadn’t even realized the beaming smile that had taken over his face.

“It’s good to have you back, Jess. And, in spirit of us expressing our emotions, I would like to tell you to stop blaspheming.”

Jessica was this close to throwing an empty bottle of whiskey at Matt. The asshole would probably catch it, but it’s the thought that counts.

Jessica sits down, finally, still growling under her breath, but having decided that she wouldn’t stand and ignore her whiskey anymore.

Matt still remembers the first time he met her. In the middle of an interrogation, which he rudely barged in on, as Jessica puts it. Matt was surprised in that very moment; his blindness rewarded him a certain courtesy from everyone around him, but Jessica Jones was quick to sideline him, and to tell him off as soon as he opened his mouth.

(He could feel her relief – whether at being set free or not having to deal with Hogarth – and that was when he knew Jessica Jones had the emotional range of a tablespoon, in general.)

(With the people she trusted, she was more bare than anything could ever be. With Matt, she didn’t ever have a choice, for he could read her since the beginning).

Matt knew explaining anything to her was futile; she’d probably get angrier and throw him out the window. She loved him (or so he hoped), but her ways of expression were still a work in progress.

“You are the first one to know.”

He could feel Jessica’s heart rate accelerate. She was exuding confusion. Matt shared the emotion – with his whole life history, the obvious choice to go back to would be Foggy. But here Matt was, standing, waiting for Jessica Jones to forgive him.

Jessica sighed. All the fight out of her suddenly, she looked at Matt and for the first time, smiled. It was a slight twitch of her lips, but given her emoting abilities, this was a beam.

“I’m serious, Matt. I don’t care if you have to save the city, or the world, or another ex-girlfriend. Make it out alive within a stipulated three hours next time, or your god won’t be able to save you.”

Matt walked closer to her, stood by her side, and made a promise.

Foggy would tell you Matt’s promises hardly ever meant anything. But Jessica was the holy communion, and you don’t lie to a figure of holiness.

Matt and Jessica waited for a breath. Two breaths. Three. And in the middle of the fourth breath, they crashed into each other. They had being doing this, this something, for a while before his ‘demise’. This “something” was heavy make-outs and hurried sex. A need too close to love, a desire to protect the other too close to martyrdom. But neither called it anything, because reality tends to break things.

This hug was everything Matt thought he had lost. Sex with Jessica was great, so were her heavy kisses; but this simple touch was what he had missed while at the nunnery. He missed being held by her, physically or through her words, while she put him back together. Matt hadn’t healed completely yet, and he knew he wouldn’t till he saw Jessica. Jessica was always the one who could set his bones back straight the best.

Suddenly, Matthew Murdock had his sight back. Jessica was his eyes, a complete 20/20. She saw the world through her camera lens, and sent it to his mind through her words and her touch. Matt could feel the sweat on her body, a reaction of the stress and anxiety she was experiencing a few moments ago; the coldness of her palms, hot at the back of his neck. He could smell her coconut shampoo, faint because she hadn’t washed her hair in a few days now.

He could see her, the moment she had touched him. Matt was a tactile person, he used touch to ground himself. But with Jessica, he needed touch to be able to feel his own heart.

For Jessica, Matt was her moral compass, albeit one having a questionable character. He made her think, not about what she should or should not do, but about whether or not she would be able to live with what she was going to do.

For a blind man and a shut down PI, they were two weird people who fit together, because they could never lie to each other. They knew all of each other’s lies, and so nothing was left unveiled to trick the other with.

Jessica sighed into his shoulder. Matt knew she was angry. She would remain so for a while, but he was glad she had not chosen to take her anger and sit in a corner. He needed to announce himself to everyone, but he didn’t think he could do it without Jessica’s erratic heartbeat grounding him.

“You owe me good whiskey for all this drama.”

“I will, but only if you eat dinner with me today.”

Jessica sounded skeptical, but her heartbeat was steady. She wasn’t unsure.

“Exactly like a date, and because you haven’t eaten for days.”

“You know I can hear you even under your breath, Jess. Come on, I haven’t had anything but boiled vegetable soup since ages now. Work with me here.”

Jessica picked up the phone and ordered Chinese takeout. For the both of them.

Matt and Jessica had their dinner in silence, with bits of questions from Jessica and answers from Matt. He could hear her heartbeat, she could hear his steady breaths. Deprived of it for so long, both of them wanted to listen to each other, to the telltale signs that the other was alive.

They still wouldn’t call it love. Denial wasn’t just a river in Egypt.

Soon, Jessica passed out on the couch. She drank too much this time.

Matt knew he had to make her drink water, or else the hungover Jessica he would have to face tomorrow would eat him alive. But Matt also knew Jessica had nightmares, and she was scared of touch when she couldn’t see it. So, holding her close and making her drink water was not an option.

Matt did what he always does: went to the kitchen, poured water in a glass, and rummaged around for a straw. Coaxing Jessica into opening up enough to gulp down water was easier when you were far away from the risk of getting punched.

(If Jessica remembered his takeout order, Matt remembered the layout of her house. They were good at pretending and denying, but things were coming to life. I love you was a phrase too close to his mouth now.)
He grabbed the last straw. Jessica was coaxed. Water was had. Matt was cursed, again. The day was over. Matt laid down on the ground by Jessica’s couch.

Tomorrow, Jessica would wake up to go to the bathroom. Tomorrow, she would wake him up by accidentally stepping over his back. Tomorrow, Matt will find out he doesn’t feel ache in his back anymore, probably because Jessica’s snort was too loud. Tomorrow, they will have breakfast together, and he’ll spend one hour coaxing solids into her.

But tomorrow, he will have Jessica. He will be impulsive and strong and hold her hand when Foggy knocks the door of her house. Tomorrow, she will hold his hand throughout the story-telling session.

But today, it is done. Matt is back. Jessica is angry. Matt knows she is relieved and happy, and Jessica knows he knows.

Midland Circle lost. But, being buried under literal rubble could not stop Matt Murdock from saving Jessica Jones from her emotional rubble.